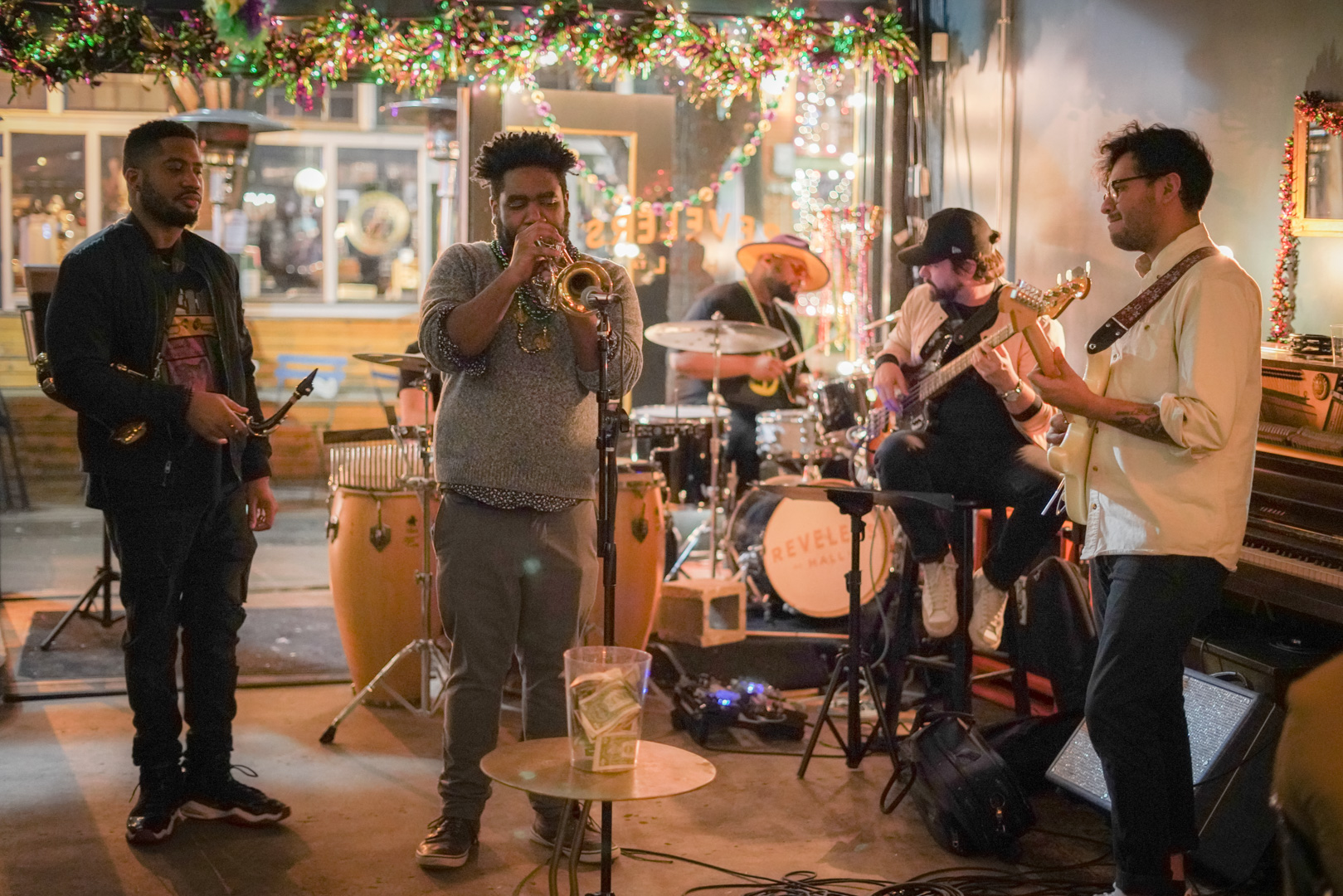 For those who may not know, Mardi Gras means “Fat Tuesday” in French, and is the celebratory carnival that leads up to the beginning of Lent. The name “Fat Tuesday” refers to the practice of consuming all of the food forbidden while fasting during Lent, which begins on Ash Wednesday.

Many celebrations happened over the weekend to show support for the Mardi Gras season, and on Tuesday night New Orleans native Terence Bradford and Congo Square played at the annual Fat Tuesday party at Revelers Hall in Bishop Arts, Dallas.

Terence Bradford and his brother JT moved from New Orleans to Dallas in 2012, started the Big A$$ Brass Band in 2013, and then in 2014 started Congo Square with guitarist Kevin Arellano, which would eventually evolve to include bassist Michael Boss, drummer Dwayne “Gummi Bear” Berry, percussionist Juan Galdamez, and on saxophone Steve Brown, with Bradford’s brother JT occasionally filling in on sax.

“When I got here, I saw a bunch of other bands doing New Orleans music. Since I’m from there, I knew I could do it right,” Bradford said.

In the southern corner of Armstrong Park in New Orleans is Congo Square, an open space where enslaved African Americans were permitted on Sundays to gather throughout the 19th century for  that played a substantial role in the development of jazz.

In 1817, a city ordinance in New Orleans restricted enslaved people to a single gathering place, which was Congo Square – an open space where Africans could gather on Sundays for meetings, open markets, and the African dance and drumming celebrations. It is oftentimes referred to as the birthplace of jazz, with pianist Jelly Roll Morton declaring that the habanera rhythm must be present in order for music to be labeled as jazz. He often referred to it as the “Spanish tinge”, and the rhythm of the habanera was adapted into the second-line beat.

“Back then, everything was controlled by the French, and they were pretty relaxed with their slave laws,” Bradford said. “Slaves were allowed to gather on Sunday at Congo square. People from different African tribes would play music together and dance. There was a strong Caribbean influence from people who came up from Haiti and Cuba, and with NOLA being a port city, it brought those rhythms in as well.” The inclusion of hand percussion in the ensemble is a direct reflection of the rhythms that come from the Congo Square influence, elevating the whole sound of the band. 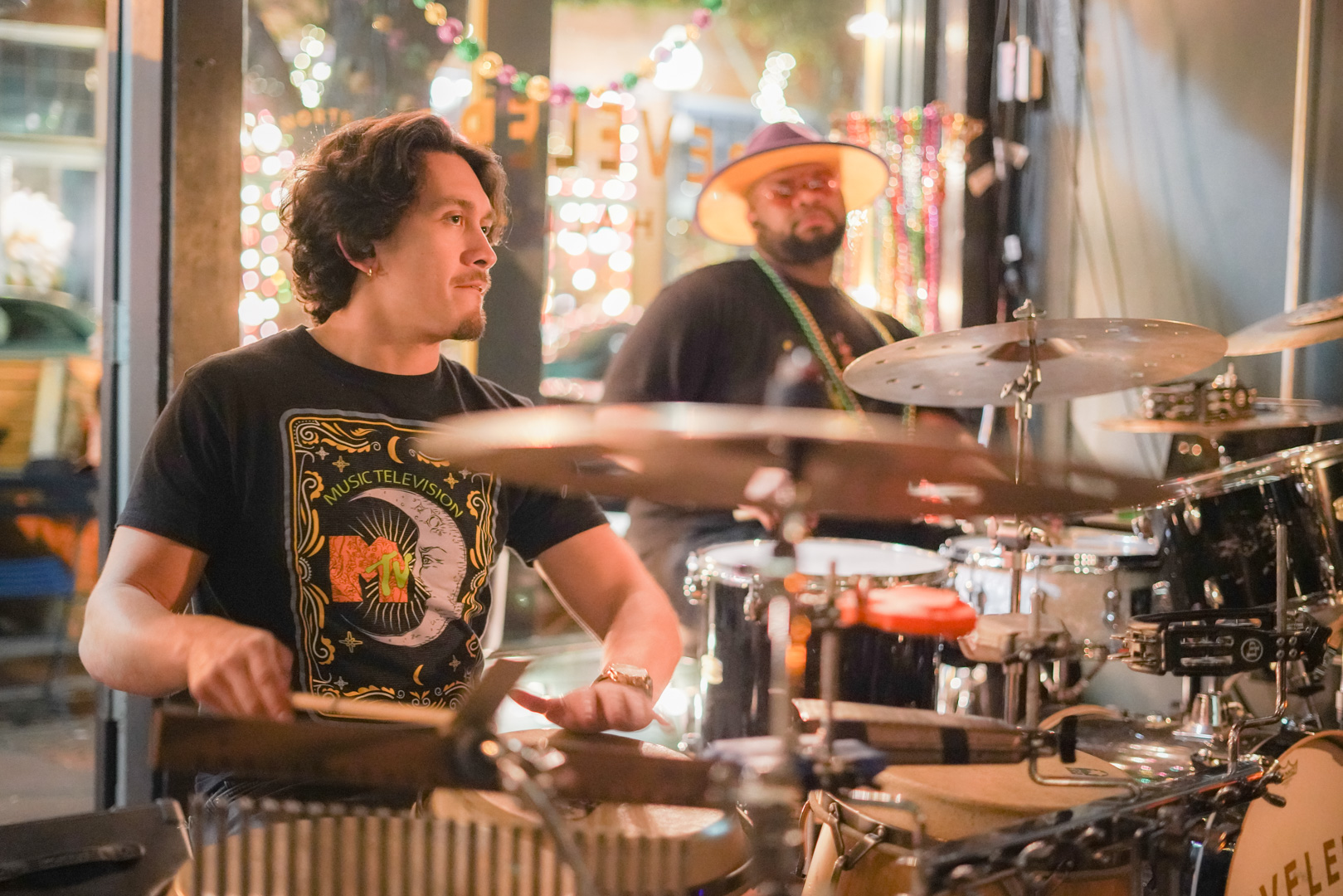 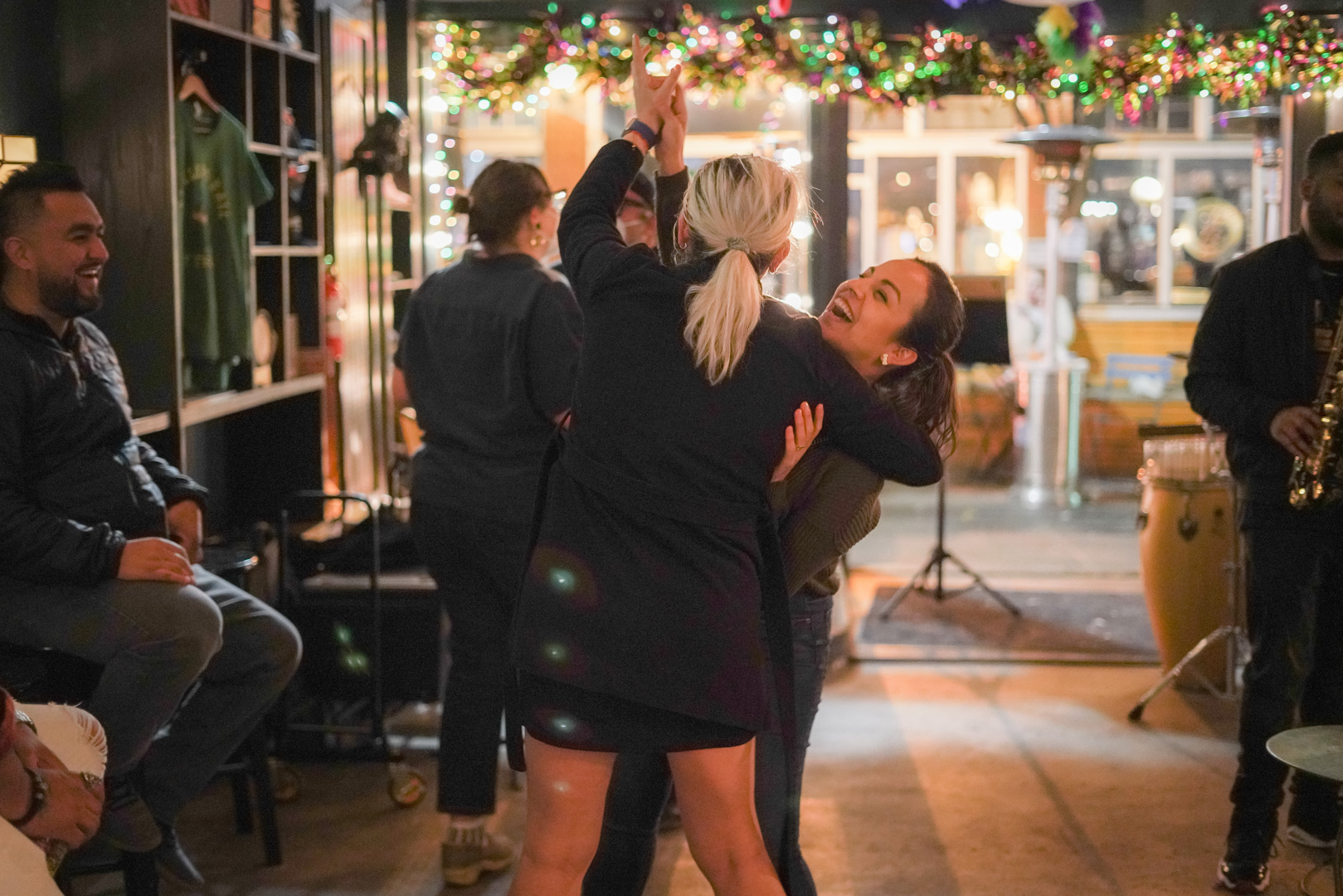 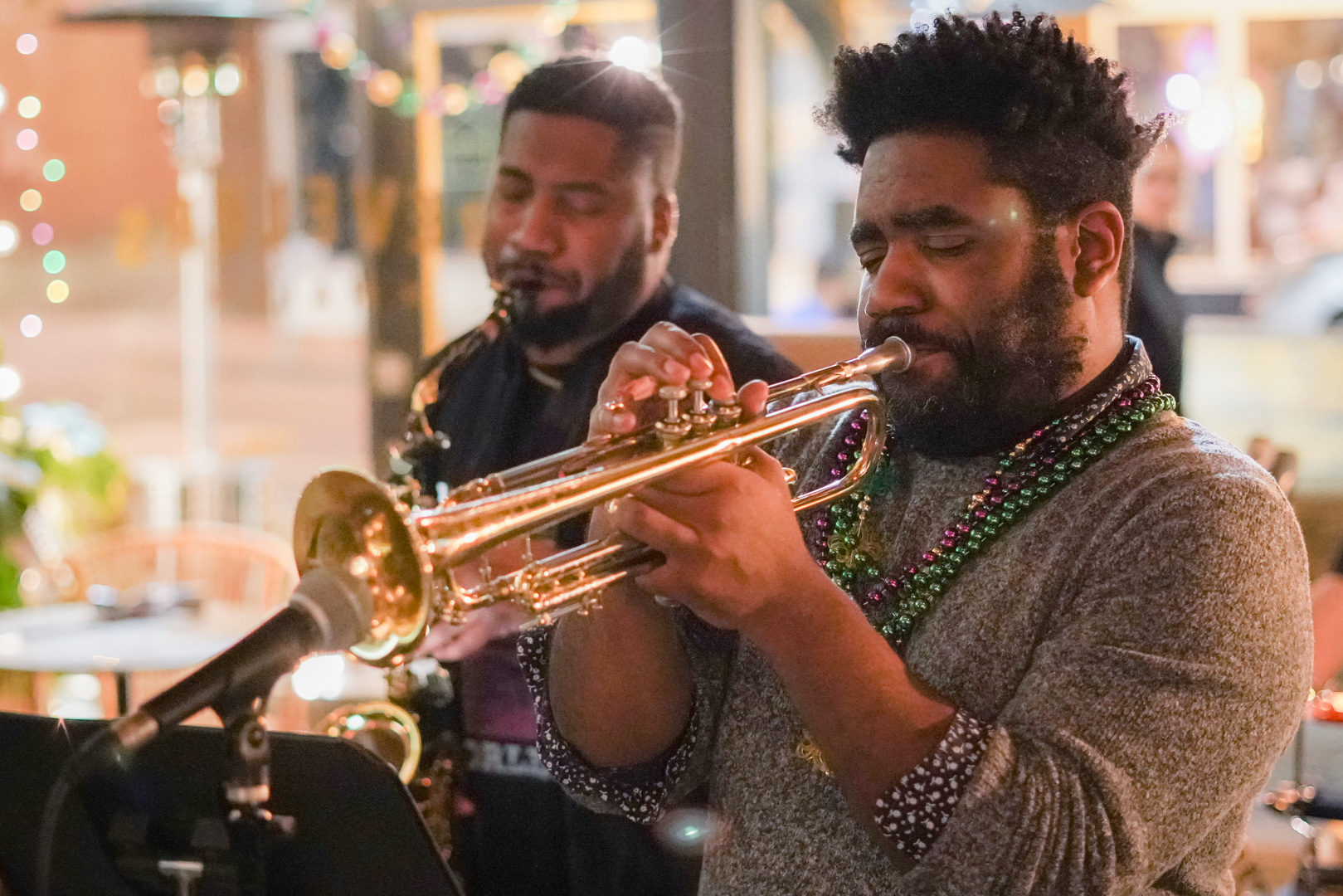 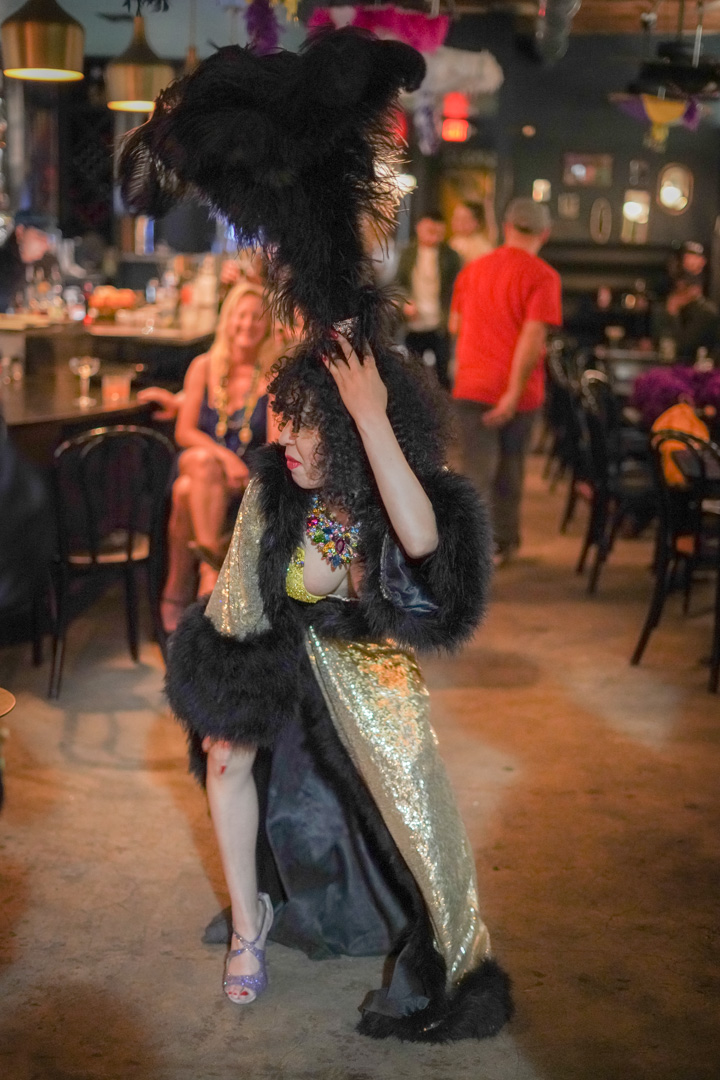 Burlesque performer and New Orleans native Delilah DuBois showed up at the end of the night dressed for the occasion and danced an impromptu number during the band’s performance. Photo: Jessica Waffles 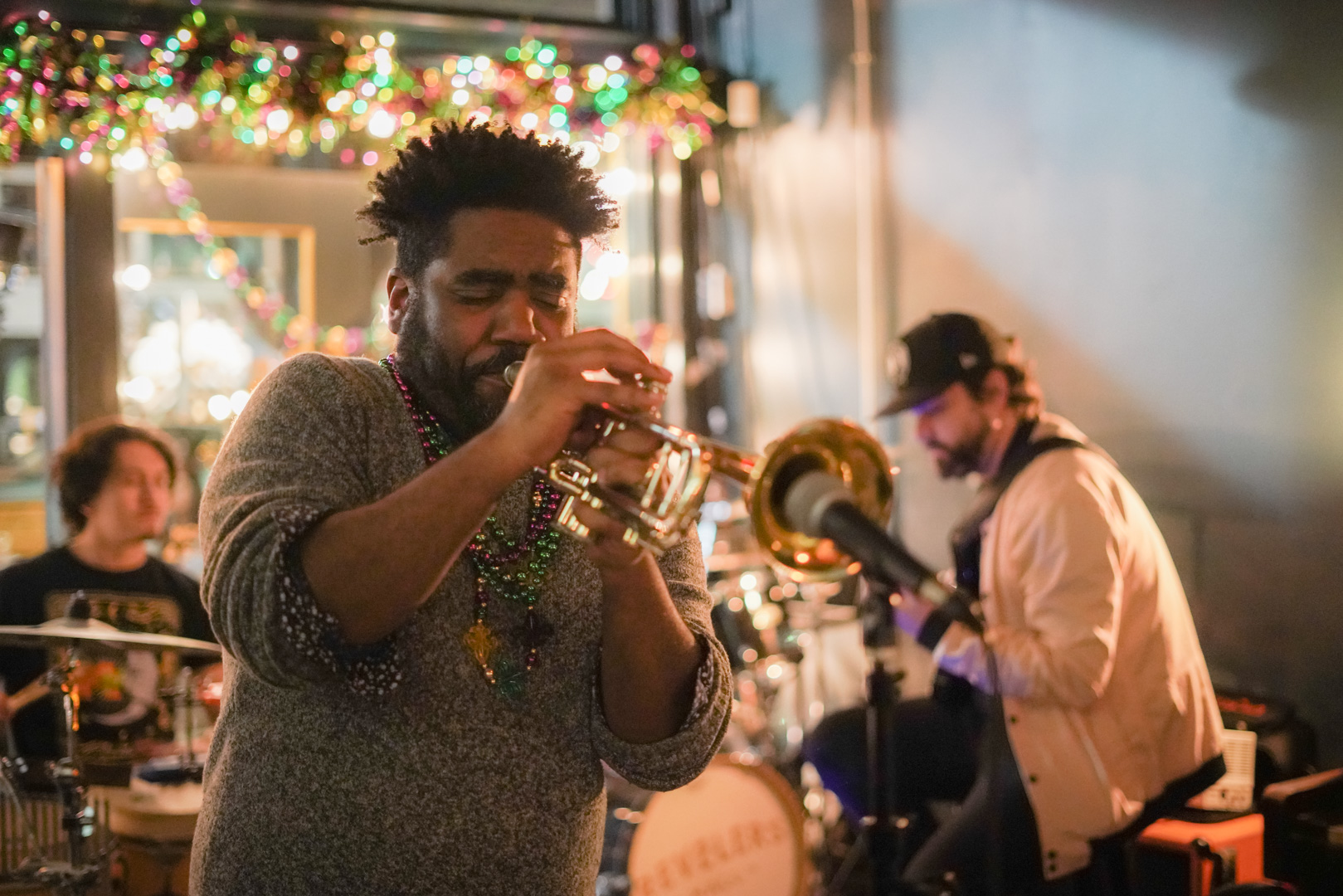 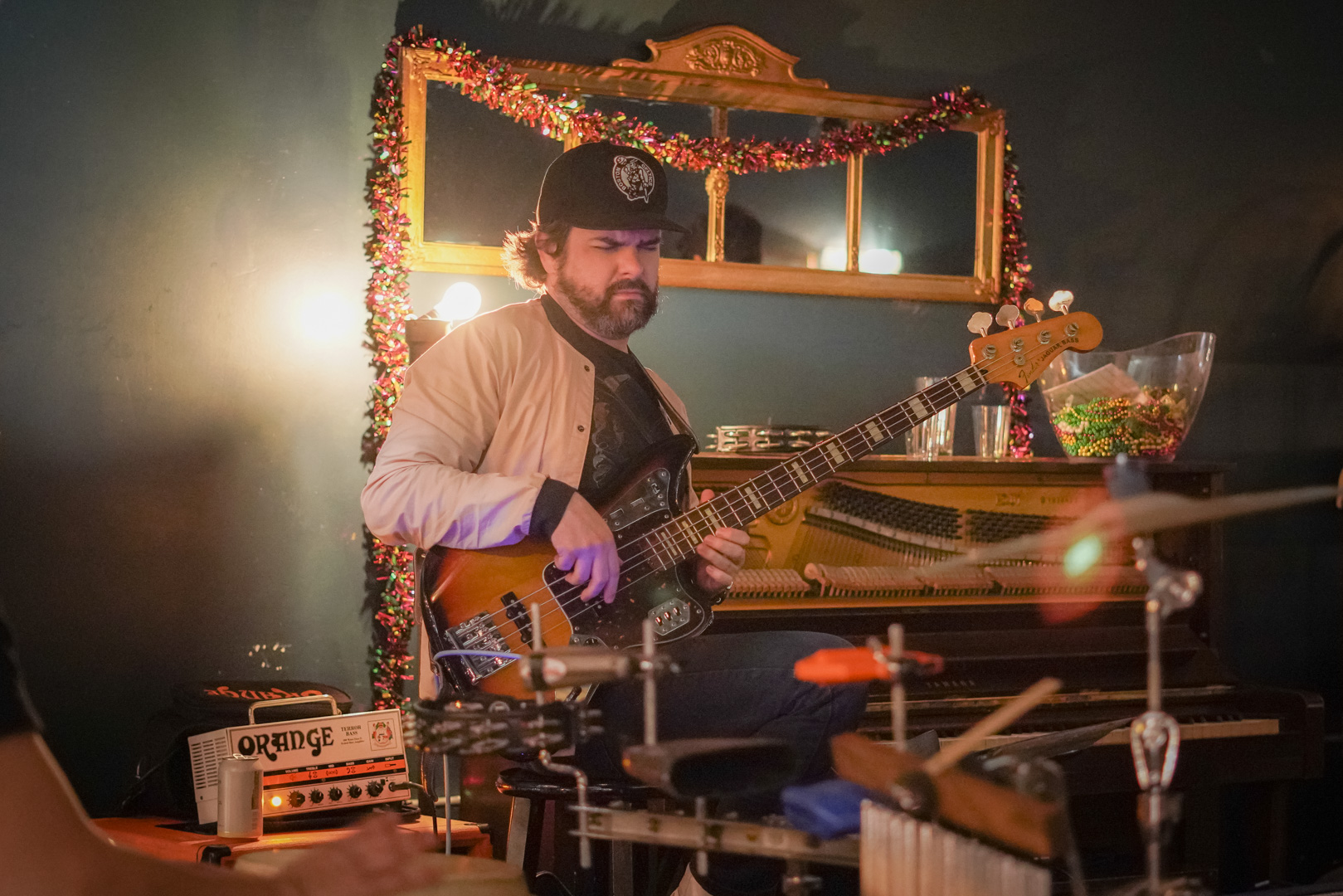 It was delightful to realize that Michael Boss’s bass notes could be felt through the floor at the front of the room, where the wood paneling allowed the frequency to be transferred to the seating area. Photo: Jessica Waffles 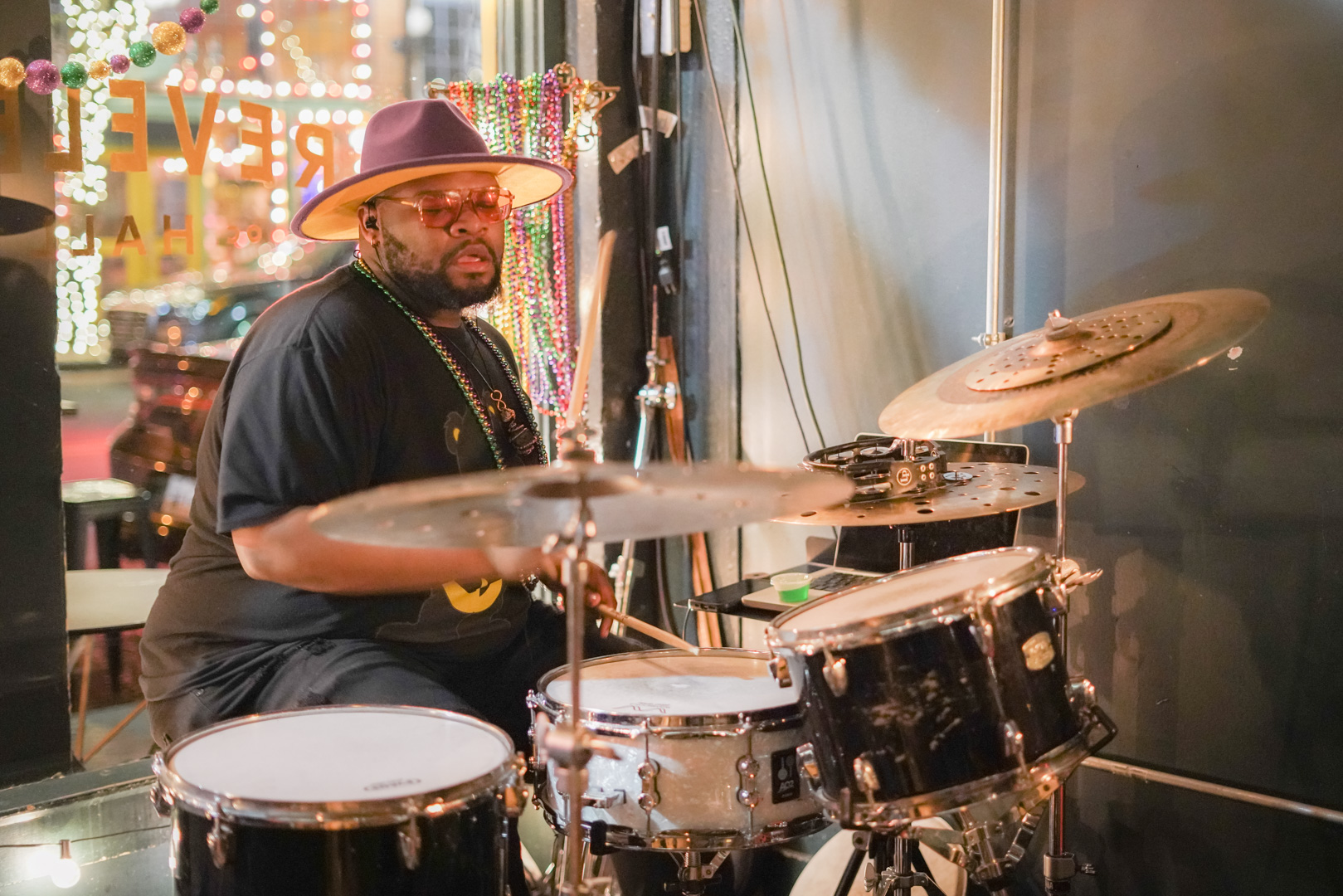 Dwayne Berry is known around the music scene as “Gummi Bear,” and plays with many musical outfits in North Texas. 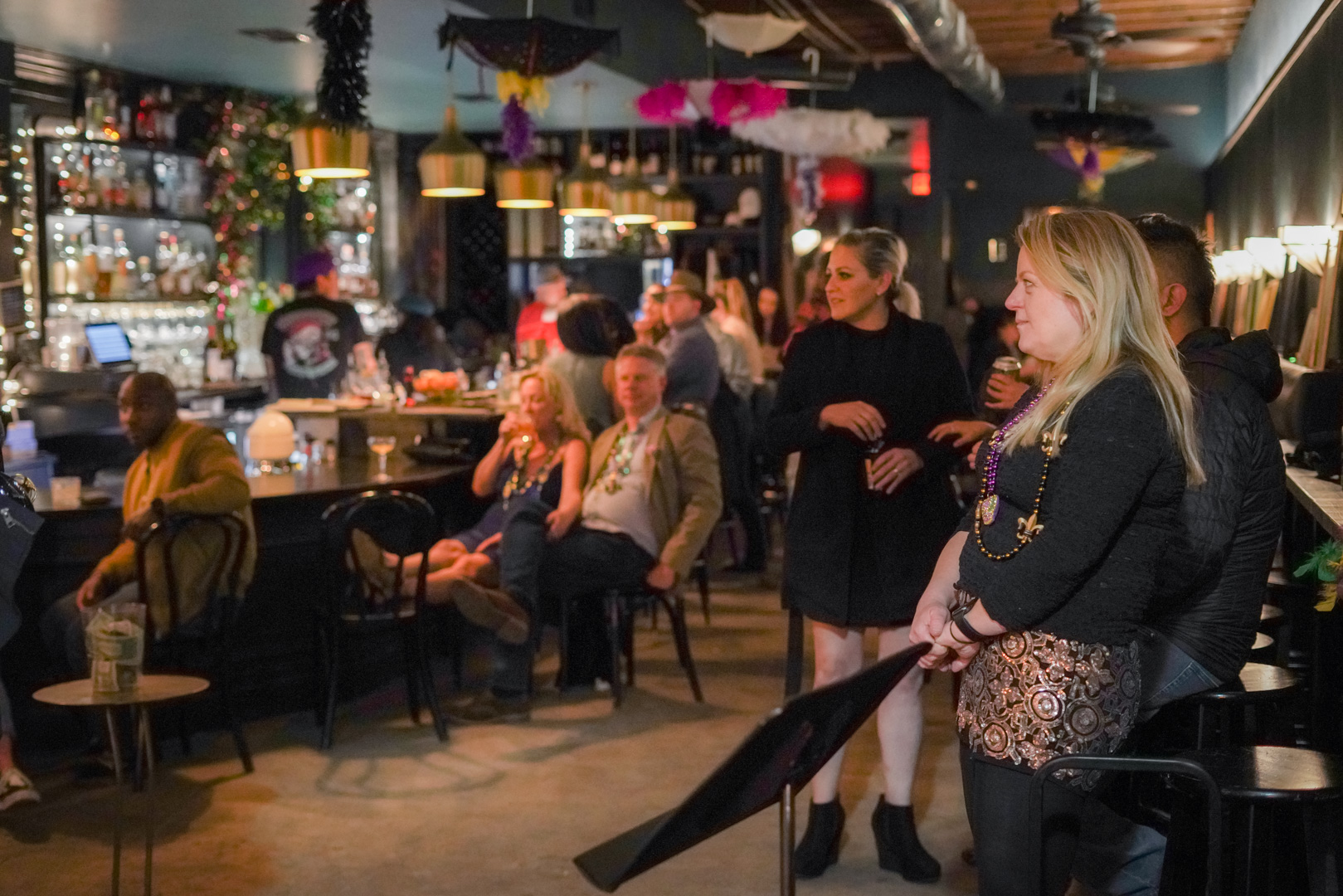 The gathering was small but full of appreciation for the music on Fat Tuesday at Revelers Hall. Photo: Jessica Waffles 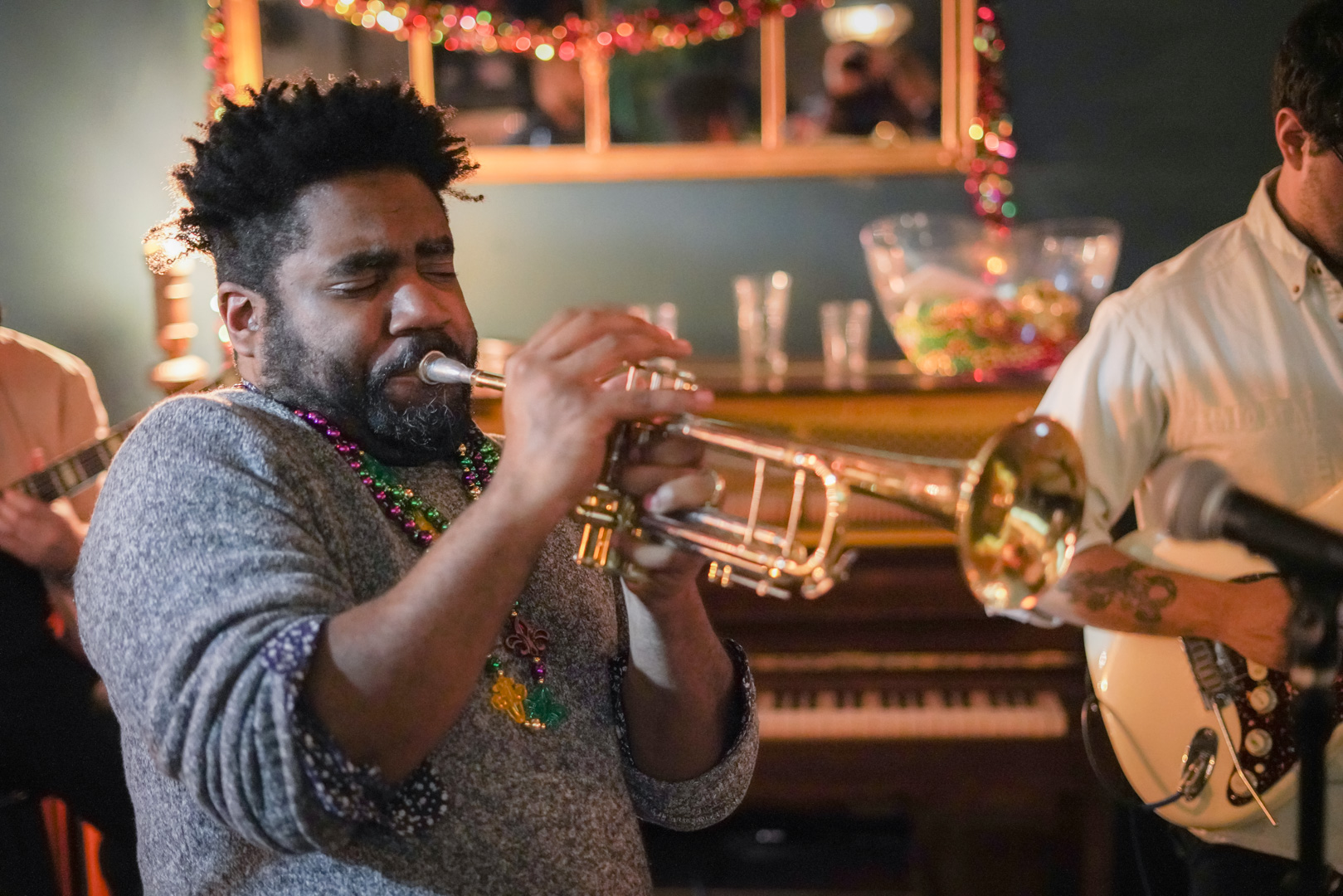 Terence Bradford has been making music in Dallas since 2013, when he started the Big A$$ Brass Band. Photo: Jessica Waffles 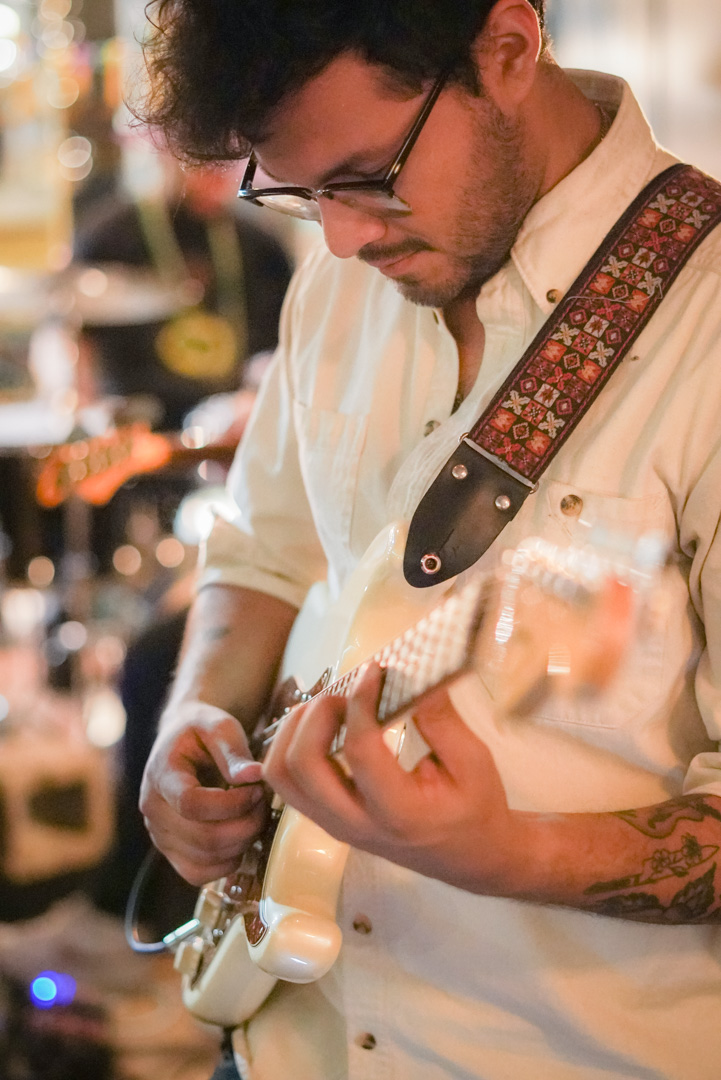