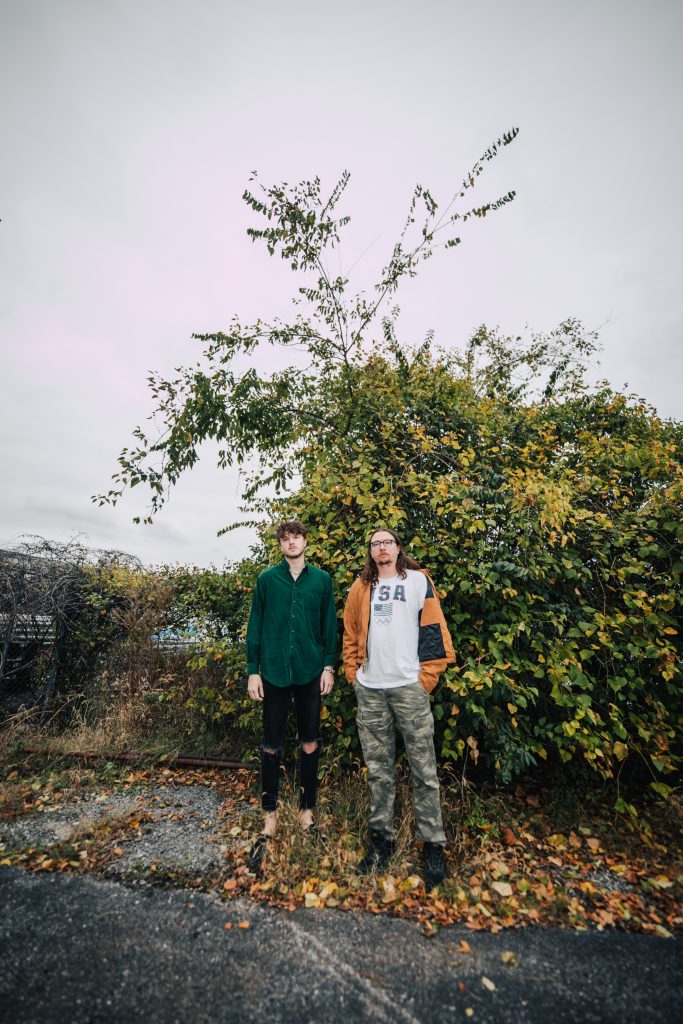 There might not be anyone who believes in the North Texas music community more than Drugstore Cowboy right now.

With their just-released record titled Maverick, the self-described “anti-pop” duo of Carter Davis and Grant Thompson always knew they wanted to showcase as many artists among Dallas’ music scene — one they say is quite underrated — as possible. Drugstore Cowboy’s music is often hard to shackle to one genre as it mixes elements of folk, alt-rock, and hip-hop, so the musicians’ shared taste for diverse sounds made it easy to integrate with artists from scattered pockets all over the city.

Just as easily as they connect with rapper Ken LaFlaire on the warm and lustrous “Broken Friends,” Thompson and Davis link up with pop musicians like Loren Kole and Cabus for catchy cuts about toxic relationships. That audible chemistry doesn’t come from filling in puzzle-pieced features on previously written material, however. The duo estimates about 80 percent of the songs were written from the jump to find shared experiences with their collaborators.

More than anything, though, Maverick is an unapologetic love letter to Dallas. Song titles like “Victory Ave.” and “Reunion Arena” are conspicuous nods to Dallas landmarks of both past and present. What’s more, the album cover is literally an old photo of the city’s iconic skyline featuring the now-demolished Reunion Arena.

(Warning: This song contains language that some might find offensive.)

“We’re Dallas ‘til we die,” Davis said as we caught up with him via a three-way phone call with Thompson. “And we want to help build something and really shine a spotlight on the talent here.”

How did you guys decide on the artists you wanted to work with on Maverick?

Carter Davis: I think immediately when we had the concept for the album, we already had a lot of these artists in mind. Once we started doing it, people kind of heard about it just through friends of friends and they would come hang out in the studio and be like “we should do a song together.” We thought about doing a Maverick part-two before we even finished this one because we had so many people we wanted to get to, and that’s just a testament to how deep the talent is in Dallas.

And those relationships you crafted throughout the production of this album translated so well! To me, “Same” with Garrett Owen particularly stands out with natural chemistry.

Davis: I think the world of Garrett! He’s actually one of my good friends, and he’s essential Dallas [music], just the epitome of it.. and one of the best to ever do it as a singer-songwriter at all, so it was an honor to have him. Grant had only met him a couple times, so he was stoked to get him in the studio.

Grant Thompson: Yeah, I felt like Garrett had a really relaxed approach to making that one. And I think part of it was because genre-wise, he was the only singer-songwriter artist that we had on the album, everyone else did hip-hop, pop, or alternative.

What’s interesting is that it seems like you guys had just as much chemistry with more up-and-coming artists like Honie Gold and Twotwntytoo, as well.

Davis: With that song, I actually came up with the hook while driving to the studio for our first session with Cabus. But then later that night, Grant and I were like, “You know what would be cool? A cypher of all-women rappers.” It didn’t turn out with quite as many people as we wanted, but I saw a video Honie Gold did and I thought “Oh my god, she’s great,” so we hit her up and she just laid that one down so smoothly.

Thompson: We actually met Twotwntytoo through another friend already on the album, J Payne, who features on “Victory Ave.”

Now that you worked with so many artists on a single project, I’m curious to know where you stand on this never-ending Dallas folklore of the idea that “Dallas doesn’t support Dallas.” Are you familiar with that debate at all?

Davis: I’m familiar [laughs]. I think, theoretically, Dallas artists are supportive of other artists. I think it’s more of a geographical issue, though. Everything is so spread out in Dallas that it doesn’t seem like people are supporting you, but they’re trying to, it’s just almost impossible to physically be in so many places.

Thomas: With the way the music industry is set up here, I feel like we have a bunch of dogs chasing a very, very small bowl of food. It can add a huge competition level, but that can also be a good thing because when you do have something smaller [to work on], it can make your friendships flourish better. I think that’s something I learned working on Maverick — these songs were built from new friendships.

Drugstore Cowboy’s Maverick is out on all streaming platforms now.

Alec Spicer is a freelance writer and a contributor to KXT.