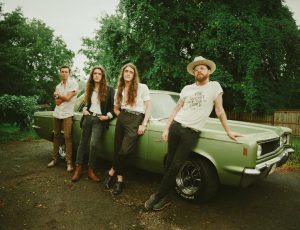 Texans have a certain kind of state pride. We’ve all heard the phrase “Don’t mess with Texas” and know how ubiquitous the state flag is around here. I’m originally from Massachusetts and I can tell you that you rarely see the state flag outside of a state institution. For some bands, where they come from is a huge part of their identity. The band behind today’s The Best Song You’ve Never Heard used their state pride as inspiration. The Weeks originate from Florence, Mississippi and were formed when they were teenagers in 2006. They started releasing a few small EPs and albums of southern tinged rock before moving to Nashville in 2011. Soon they signed with Kings of Leon’s record label Serpents & Snakes.

The band has quietly released great songs over the last decade and has even visited the KXT studio in 2017, but “Brother In The Night” exemplifies their talent. Cyle Barnes’ vocals are deep and dirty with a little bit of a Kings Of Leon quality to it. The music flowing from the entire band matches their lead singer and they throw in a few horns on this song for good measure. The lyrics really take it to another level, with a catchy chorus that shows off their home state pride. Whether it’s the Mississippi mud, their southern lungs, or the cicadas, the band beautifully illustrates who they are.