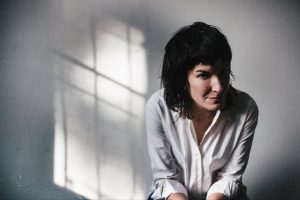 Melbourne’s Jen Cloher is finally enjoying international success. She stops by the World Cafe with her band, including her rock star wife, Courtney Barnett. After Jen and Courtney began dating, Courtney’s career exploded and Jen found herself at home alone in Australia. Tune in to find out how Jen moved through the inevitable jealousy and hear music inspired by that experience.

The Massachusetts-based quartet, Darlingside, gathers around a single microphone in the World Cafe studio to sing songs from the group’s new album, Extralife. We’ll also hear the band deconstruct one of their signature 4-part harmonies right before our ears.

In an Encore Presentation, Rihannon Giddens joins Nashville correspondent, Ann Powers, to perform music from her album Freedom Highway. Giddens shares what it was like to inhabit African-American voices from the past in songs like “At the Purchaser’s Option” and how slavery was wrapped into the fabric of all of American society.

Jorge Drexler was the first Uruguayan to ever win an Oscar. He also trained as a doctor before becoming a musician. The charming and poetic overachiever performs a whimsical set of live songs from his latest album, Salvavidas De Hielo, and reflects on the many twists and turns his professional life has taken.

The Oscars are this Sunday so we’re celebrating the silver screen on World Cafe. From tunes that have won Best Song by Judy Garland and Stevie Wonder, to some of our favorite musical movie moments like Elton John’s “Tiny Dancer” sing-along in “Almost Famous.”